Annual stimulation was performed on a west Texas well to reduce injection pressure. 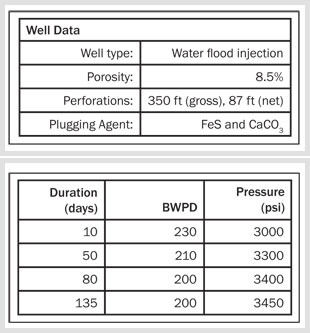 Before the last conventional acid stimulation, water was injected at a rate of 200 bpd and injection pressure was 3450 psi.

The acid stimulation similar to those from previous years produced the following results:

The well returned to pre-stimulation volume and pressure within 135 days of the treatment. Because of the less than satisfactory performance from the stimulation, the customer wanted to consider alternatives in an effort to enhance longevity.

Sabre's DiKlorSM stimulation service for onsite generation of chlorine dioxide was recommended to treat the problem. When properly staged during a well stimulation with acid, chlorine dioxide will convert the iron sulfide to water-wet hydrous ferric oxide which is then chelated by additives in the acid. The iron sulfide will not precipitate again. 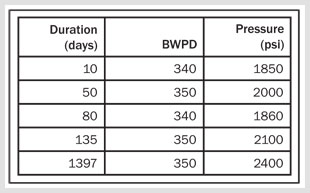 The treatment consisted of 200 barrels of DiKlor® along with 110 gallons of micellar acidizing solvent added to the acid stage. The following results were achieved:

The customer’s expectations for this treatment were far exceeded. Not only was the well pressure reduced by more than 1000 psi, injection volume increased by 75 percent. Even four years after the completion of treatment, the well did not require additional stimulation. This translated into substantial cost savings and increased profit for the customer as a result of less frequent acidizing and reduced operating costs.

The Science of Success

Unlike alternative technologies, chlorine dioxide is a true gas that is a relatively stable oxidant, reacting only with reduced compounds such as sulfides, phenols, and biomass. Additionally, chlorine dioxide kills both active and inactive bacteria, unlike conventional biocides. Chlorine dioxide has also been shown to kill bacterial spores with relatively low contact times, and bacteria cannot build resistance to chlorine dioxide. It is also a well-established EPA-registered biocide for use in the drinking water and food industries.

Sabre has over a decade of experience in the petroleum industry, with a perfect safety record to match. This is due to inherent functionality, where chemical precursors are vacuum fed to the point of reaction to form chlorine dioxide in the absence of dilution. This formation of chlorine dioxide independent of the water stream allows Sabre systems to operate with any fluid, including oil, water, emulsions, and slurries. This unique chlorine dioxide system has been patented by Sabre.

Chemical precursors on portable Sabre chlorine dioxide systems are separated by secondary steel containment to further protect from accidental mixing. Sabre has a unique understanding of the health and safety issues related to the use of chlorine dioxide due to its extensive experience with chlorine dioxide in both gas and solution phases.

When you subscribe to the blog, we will send you an e-mail when there are new updates on the site so you wouldn't miss them.