The Solution: Treatment with ClO2

A Rocky Mountain Oil producer was experiencing difficulty in reuse of fracturing fluids due to high contaminant and bacterial loading. Friction reduction and other fracturing chemical additive use rates were high or unfeasible because of the high contaminant levels. Disposal costs, fresh water costs, and water use concerns were severely impacting fracturing operations. High residual polymer levels and solids loading were contributing to high hydrogen sulfide production in the pits, causing safety and environmental concerns.

Chlorine dioxide is an oxidizing biocide that has been used for municipal water disinfection in the United States since the 1940's. It is used in the food industry as a direct food contact and incidental food additive status sanitizer and disinfectant for the vegetable, meat, dairy, and fresh pack sectors. It also has been widely used for the disinfection of municipal water wells and for the control of microorganisms in potable water aquifer replenishment injection wells. Sabre has extensive experience using chlorine dioxide for the environmental clean-up of contaminated industrial pits, lagoons, rivers, bays, lakes and buildings. The benefits for the use of chlorine dioxide in these industries are that chlorine dioxide provides superior penetration into biomass combined with superior microbial kill, while also preventing the formation of undesirable disinfection by-products such as THM's (from chlorine or bleach) and bromates (from ozone or hydrogen peroxide). Based on the company's experience with chlorine dioxide in these and other industries, Sabre developed a treatment approach.

Sabre used the same treatment approach for Oilfield pits and lagoons that it had pioneered for the treatment of Algae contamination of municipal drinking water impound lakes and lagoons. Sabre's DiKlorSMservice, using chlorine dioxide, was applied to the water to be used for hydraulic fracturing by pre-treatment of the fluid in the storage pits and tanks. Using drive water from the pit, a Sabre BB series portable DiKlor®generation system with a maximum capacity of 24,000 lbs. per day continuous production was set up at the location. This system is self-contained and has a distribution system that allows it to circulate fluids in the pit or tank. The hydraulic fracturing fluid was circulated through the Sabre chlorine dioxide system and treated in situ until the contaminants were oxidized and a slight (less than 0.1 mg/l) residual of chlorine dioxide was established in the pit. In this application, the fluids then were allowed to stand in the pit for four hours, the solids were allowed to settle and free oil was skimmed from the pit prior to commencement of fracturing. 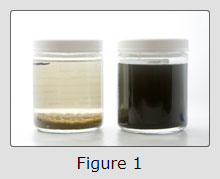 The immediate benefit of the chlorine dioxide treatment was the elimination of hydrogen sulfide off-gassing from the pits. Oxidation of the fluid allowed the separation of the solids and hydrocarbons from the water. Figure 1 shows the typical effect of chlorine dioxide on water taken from a contaminated pit. The untreated water (right) is from a contaminated pit. The same water treated with chlorine dioxide is on the left (after about 15 minutes) and clearly shows solids precipitated on the bottom, a thin oil layer on the top and clear water in between.

The water was tested for use for fracturing and found to require additive levels close to those required by fresh water for fracturing. This producer has been able to eliminate water disposal due to unsuitability and minimize make up water purchases. Additionally, fracturing fluids have been able to be stored for future use without environmental concerns due to hydrogen sulfide off-gassing and odors.

The Science of Success

Chlorine dioxide's unique chemical and physical properties make it ideal for use in treatment of stored fracturing fluids. As an oxidant, it is able to penetrate hydrocarbons and break emulsions allowing the separation and recovery of hydrocarbons. Because of its specificity, its oxidation power can be directed at contaminates such as sulfides and residual polymers without creation of undesirable by-products. Unlike bleach or chlorine, chlorine dioxide does not form chlorination by-products that can cause operational or environmental concerns. Unlike ozone and hydrogen peroxide, chlorine dioxide does not break down into oxygen, nutrifying the water and promoting subsequent microbial growth.

When you subscribe to the blog, we will send you an e-mail when there are new updates on the site so you wouldn't miss them.